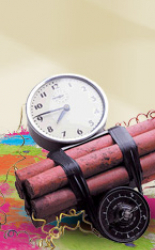 Terrorists try to destroy the world! You and your colleagues of a special unit need to stop them before they launch the nuclear bomb.

The game is determined for 6-10 players, on mutual agreement it is possible that more people can play. The event takes 4 hours and you have to book it at least 4 days in advance.

It is possible to play in Mýto (Outdoor), SPA, Líně.

Each group, police and terrorists, has the special markers at its disposal. In addition, terrorist gets a bomb.

For each win the winner gets one of the advantages :

We play according to the military paintball rules. You get the hoppers with 50 balls and you can carry max. 150 paintballs in pods. You can win them. Players can shoot unlimited ammo during the event.